@DavidMikucki, have you checked in with some other Bible publishers about another version? The Modern English Version is pretty great so far

I’m hoping in the next six months or so to start reaching out again. The main reason I haven’t is because adding the translations adds a complexity to the UX (and the code base) and I’m still contemplating how to implement it best. Translation would likely be the first user-changeable feature.

The Modern English Version is pretty great so far

Is that how it came about? It is very similar to the ESV, but preserves things like “begotten” 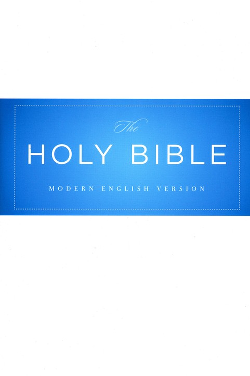 The Modern English Version (MEV) is an English translation of the Bible begun in 2005 and completed in 2014. The work was edited by James F. Linzey, and is an update of the King James Version (KJV), re-translated from the Masoretic Text and the Textus Receptus. The ecumenical Committee on Bible Translation is composed of 47 American and English scholars from the three major branches of Christianity: Orthodox, Protestant, and Roman Catholic. In June 2005, Southern Baptist minister, chief editor, ...

Honestly, I hadn’t heard about it before you mentioned it today, but based on a cursory look the MEV seems to be roughly a “newer” NKJV.

Huh, that’s interesting. I heard about it on the Jerusalem Chamber podcast. One of the guys liked it a lot and used it in his congregation

I’m asking around from some friends who know more than me. @honza, with your Greek experience, I’d be interested to hear what you think especially.

I have opinions, and you’re not gonna like them.

Modern day bible scholars and seventeenth century scholars don’t exist in the same category of language ability. The chasm is profound. What was once relatively common in terms of skill in Greek and Hebrew now seems like an unattainable ideal. The translators of the Authorised Version were so fluent in Greek and Hebrew that they wrote theological theses, and delivered lectures in those languages. Current day scholars would be helpless if they had to converse in Greek: greet a friend, ask for a glass of water, or order a sandwich. Let alone pen a defense of the gospel. Who would you rather have to translate the holy scriptures?

I’m working hard to gain a solid understanding of Ancient Greek. And yet with the relatively little that I already know, I can already spot non-trivial amounts of misuse of the language in bible interpretation. I always say that a little knowledge of Greek is dangerous, and that it’s better to learn none than a little.

I have no opinions on the MEV. I thought it was cool that my old Hebrew professor worked on some of the minor prophets.

I would discourage adding more and more translations to Relight.

The KJV is great, and it’s enough. Sure, it’s not perfect but it’s still better than the alphabet soup of modern translations. I have been thinking about this topic a lot lately because it’s relevant in my personal life. I should write a blog post about it.

A few brief statements that could be fleshed out if there is interest:

It is absolutely false that comparing translations during bible study is a good thing.

I’d like to hear more about this. I really enjoy listening to the ESV being preached while reading the KJV myself. Not that I’m intensely comparing the differences, but it’s interesting to notice the language and I hope that I’m getting a bit more of the “sense” of the original by seeing two different English translations simultaneously.

Basically, this is fake piety. On the surface of it, it sounds like you’re being a good student of the word of God by taking advantage of the “embarrassment of riches” we have today in terms of English translations of the bible. But in reality, it’s an atheistic, relativist approach. You seek your own truth by setting yourself over the text… You will favour the translation that renders difficult or offensive passages more gracefully. You will prefer one that is friendly to the LGBT crowd. I think it necessarily leads to the satanic attitudes like, does it really say that?.

I guess I can see your point if the person in question is comparing translations with the result of trying to decide which to believe, or pitting them against each other. I’d like to think that I’m still putting myself under both translations and using them to show me different facets of the truth expressed by the original language.

I don’t think consuming God’s word via multiple translations necessarily leads to satanic attitudes. But if one has such attitudes before coming to the text, it would be easy to express them through picking and choosing the “preferred” translation for each passage. I’m definitely not educated enough to be able to prefer one rendering over another for individual phrases, and I find myself bound by the full text of the ESV, the KJV, and the NIV84, each of which I refer to with some regularity.

@honza, I definitely agree with your assessment of the danger and indeed the dreadfully common error. And I also don’t know Greek or Hebrew, so I’m not qualified to make much of a judgment here. But when I’ve utilized multiple translations, it’s because I know that a word often carries more meaning than can be expressed in a direct translation. This is even demonstrated by the fact that the KJV has alternate translations in its footnotes.

A good example of this is the Greek word bowels in John 7:38. The translation bowels in the KJV is a bit confusing to modern hearers until they become accustom to the metaphor. The ESV has a highly poetic translation, heart, seeking to carry the idiom across culture and language. The NASB renders it innermost being, which is about as poetic as a block of wood, but helps to communicate what the original poetic word intended to communicate. From this, I deduce that an even better translation for modern ears, or at least a way of helping people understand the meaning, might be to render it gut. That gets the metaphor, the meaning behind the metaphor, uses a modern idiom, and gets the anatomical location correct. In any case, the translation comparison has helped me feel like I have a better grasp of what was originally said. It relates to the core of who we are, in a visceral/deeply felt way. Out the center of my deepest affections, where I feel and know things most deeply, will flow rivers of living water. That’s better than being confused about bowels.

But again, the value of this isn’t super high, especially if someone simply explains it well in good study notes. Not only that, but it takes an understanding of translation-theory that most people lack to get any value out of the practice whatever. I personally would sooner read the Bible with the Geneva Notes and/or the Reformation Heritage KJV Study notes to help me understand the various idioms and things that were hard to translate.